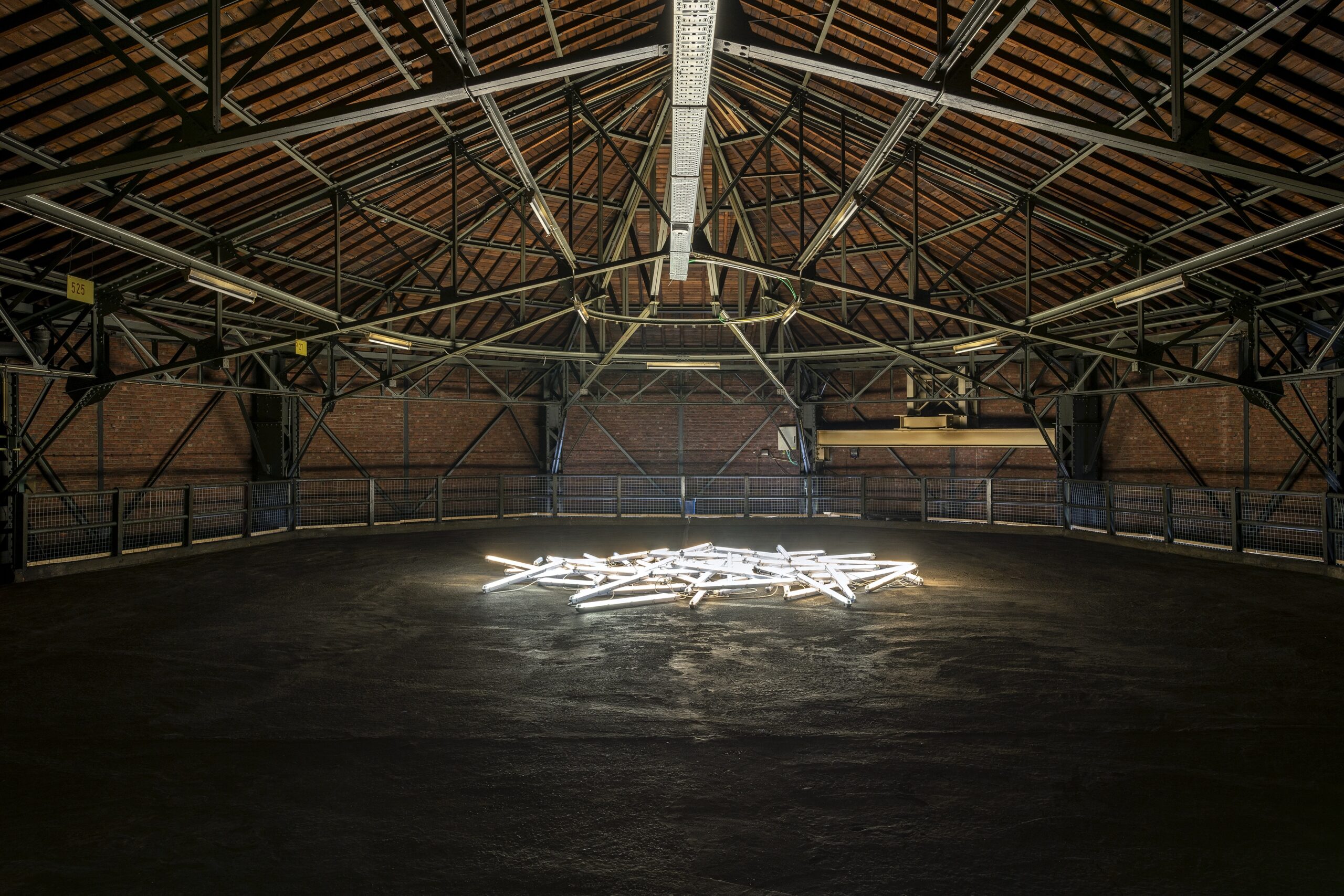 From 4 February 2021 onwards, KANAL–Centre Pompidou will present the second part of the exhibition It Never Ends, an extensive carte blanche given to John M Armleder. In September 2020 the Swiss artist was invited to fill the six floors of the showroom of the former Citroën garage. The result is a dialogue between a series of large installations, which he specifically designed for the space and a constellation of exhibitions, performances, concerts and meetings, which will be presented to the public in accordance with health requirements.

The second part of It Never Ends continues to explore the world of Armleder. As a solo exhibition which also showcases the work of other artists, this project reaffirms the ethical and aesthetic dimension of the work of John M Armleder, who has always thought about art in terms of collaboration, friendship, and hospitality.

PUBLIC SPACE
The exhibition takes place in a public space, open from Thursday to Sunday, 11:00 to 19:00 with free admission, occupying the first two levels of the building. Upon entering, visitors encounter a new installation by the artist, made out of scaffolding, plants, lights and screens, which connect the ground floor with the first floor where the artist has produced one of his largest Furniture Sculptures in situ. This public space also features an experimental library (designed and produced in collaboration with CIVA – the International Centre for Urbanism, Architecture and Landscape), a temporary printing press offering workshops to the general public, and a co-working space, all free of charge.

IT NEVER ENDS – PART 2
The exhibition continues on the four upper levels: each of the industrial floors of the showroom has been filled by Armleder in a different way. As in Part , different exhibitions are on display, conceived and staged by the artist himself. These exhibitions include works by guest artists as well as presentations of collections. Alongside some of the installations already shown in Part 1, visitors will be able to discover a monumental sculpture, in the form of a golden mushroom, by Sylvie Fleury (Mushroom Autowave Rich-Gold Petzold silber F14, from 4 February to 25 April); a spectacular solo exhibition by Swiss-American artist Christian Marclay (from 4 February to 7 March); and the rare presentation of a set of Fluxus boxes from the collection of the Musée National d’Art Moderne (MNAM) – Centre Pompidou in Paris, staged by Armleder himself.

The exhibition will also feature the work of Genesis (Breyer) P-Orridge (Loyalty Doesn’t End with Death – from 18 March to 25 April), who died in March 2020 while working on this exhibition for It Never Ends. The Big Bird exhibition closes the series, bringing together three painters – Domenico Battista, Thomas Downing and Olivier Mosset – in an experimental scenography specially designed by Armleder.

A RADIO EXTENSION
Initially, Armleder’s project was to be accompanied by a major live programme: concerts, performances, screenings, meetings and workshops, conceived in dialogue with the artist. Due to the pandemic, however, KANAL–Centre Pompidou will not be able to offer this programme as of 4 February. It will be presented to the public as soon as the health situation allows it. The Studio K – A Radio Room project grew out of this situation, and since 14 January 2021, has offered different artists, performers, musicians, cultural producers, collectives and mediators a space for exchange and creation that is accessible, open and focused on experimentation and reflection, despite the current health restrictions. From 4 to 7 February, for the opening of It Never Ends, Part 2, Studio K will broadcast live from the showroom during the opening hours of the exhibition, with interviews, readings, creations and archives related to the exhibition conceived by Armleder.